The following Text is a cross post. Originally it was written and published by activist of Frontline Defenders: https://www.frontlinedefenders.org/en/case/pressure-family-member-migrant-rights-defender-tajana-tadic

As an anti-repression campaign we want to express our solidarity with all political activists in Croatia and everywhere of course who are fighting against the racist, highly violent and deadly European border regime. The case of Tajana and her partner is showing how the authorities are again and again trying to intimidate, controll and opress (practical) solidarity and resistance! Solidarity will win! 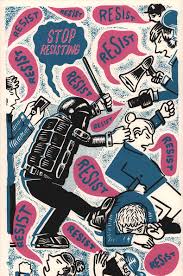 Pressure on family member of migrant rights defender Tajana TadićOn 5 November 2020, the appeal hearing into the case of the partner of migrant rights defenderTajana Tadić, is scheduled to take place at the Administrative Court of Zagreb. The appealconcerns a decision issued by the Ministry of Interior on 11 May 2020 to revoke his refugee status,which was granted in 2018.Tajana Tadić is a program manager with Are You Syrious (AYS), a human rights organisationcreated in 2015 in Croatia supporting migrants on the Balkan migration route. AYS providesmigrants with legal aid and psyco-social support, runs integration programs for children and adults,produces reports and analysis denouncing violent pushbacks and other illegal practices by theauthorities, and contributes to the reshaping of policies through advocacy work. AYS is part of theBorder Violence Monitoring Network, which in January 2020, published its first annual reportalledging torture of asylum seekers by Croatian authorities at EU external borders.Her partner is an Iraqi citizen who arrived in Croatia on 26 April 2017 and was granted refugeestatus on 7 September 2018. The pair met at AYS during his asylum application process. He hasbeen volunteering with AYS, assisting asylum seekers with translation and taking part in theeducational and integration programs of the NGO.On 5 November 2020, the Administrative Court of Zagreb will deliver a decision on the appeal ofTajana Tadić’s partner against the revokation of his refugee status. The Ministry of Interior initiallyrevoked his refugee status on 11 May 2020 on allegations that he represents a “threat to nationalsecurity”. Neither he nor his attorney have been given access to a part of his file which has beenclassified as “secret”, after the Ministry of Interior objected to their requests.Tajana Tadić’s partner has been harassed by police on multiple occasions in relation to the womanhuman rights defender’s activities for the protection of migrant rights. On 9 October 2019, hereceived a phone call summoning him to the police station at Petrinjska Street No. 30 for aninterview allegedly concerning “the register of persons who have entered the Republic of Croatia”.On 10 October 2019, he arrived to the police station where he was questioned, among otherthings, about his relationship with Tajana Tadić, people who he met in the Centre for AsylumSeekers, as well as some people he’s not acquainted with. In addition, content on his mobile phonewas checked by a police officer, without a warrant. During the interview, he was asked by a policeofficer to meet informally at a cafe and was told that he should help police by providing them withinformation about other refugees. When he refused, the police officer reportedly started to threatenhim with revocation of his refugee status, and deportation to Iraq. Following the interrogation, thepolice officer confiscated his residence permit despite the fact that such an action was illegal, andreturned it only after Tajana Tadić’s intervention. AYS and Tajana Tadić have been targetted by Croatian authorities since 2018, when the Minister ofthe Interior, Davor Božinović, sent a written reply to Member of Parliament Peđa Grbin to hisquestion about the circumstances surrounding the death of Madina Hussiny, a six-year old Afghangirl, at the Croatia-Serbia border. In the letter, the Minister accused AYS of encouraging illegalmigration to Croatia. The statement by Minister Božinović was reported by numerous media,seriously damaging the reputation of the NGO. Not long after its publication, AYS was subjected tojudicial harassment,where the Ministry of Interior implicitly sought to ban the work of AYSassociation.

In 2018, AYS were been subjected to several instances of police harassment, police questioning ofstaff members and beneficiaries and vandalism of its premises. On 17 April 2018, the eveningbefore a press conference hosted by AYS and the Centre for Peace Studies on police pressure andintimidation, police officers arrived at the private address of Tajana Tadić’s parents. Theysummoned Tadić to an interview with officers from theCroatian National Police Office forSuppression of Corruption and Organised Crime scheduled to take place at the same time as thepress conference. The interview was linked to a case filed by Madina Hussiny’s family againstunidentified perpetrators in the ranks of the Croatian police, accusing them of death by negligence.Front Line Defenders believes that the revocation of Tajana Tadić’s pertner’srefugee status may bein retaliation for her peaceful and legitimate human rights work. Front Line Defenders is deeplyconcerned by the apparant lack of a safe and enabling environment for migrant rights defenders inCroatia, who face judicial harassment and stigmatisation for their legitimate human rights activities.Front Line Defenders urges the authorities in Croatia to:1.Immediately reverse the revokation of the refugee status of Tajana Tadić’s partner, as it isbelieved to be linked to his connection with the migrant rights defenders movement inCroatia;2.Take measures to ensure that government officials or other public figures refrain frommaking statements or declaration stigmatising the legitimate work of human rightsdefenders;3.Guarantee in all circumstances that all human rights defenders in Croatia are able to carryout their legitimate human rights activities without fear of reprisals and free of allrestrictions, including judicial harassment.