This is an update on the court case involving G. and I., a German and an
Italian activist arrested in Croatia in September 2016 whilst helping a
family of 4 undocumented persons to reach Zagreb. The trial situates
itself in the context of the militarization of the European external
borders taking place between Serbia, Croatia and Hungary as well as the
widespread criminalization of migration and acts of solidarity,
affecting most countries.

Due to the progressive tightening of the external European borders since
September 2015 and the closure of the humanitarian corridor, which
temporarily instated some degree of free – although heavily
state-controlled – movement from Greece to central European countries,
the mainly transitory status of the Balkan region has invariably
transformed into a “buffer-zone”. The completion of a physical barrier
on the border between Hungary and Serbia was merely one amongst the
developments which led to thousands of people being stuck in Serbia,
with the only option of crossing illegally into Europe and facing not
only criminalization but also police violence. In fact, illegal
pushbacks carried out by border police both in Hungary and Croatia at
the expense of people who attempted to cross the border from Serbia and
expressed intent to request asylum, became standard practice and
continue up to this day. Beatings and dehumanizing acts against migrants
were and still are methodically perpetrated as well as overlooked by the
hypocritical Europe of “human rights”. In response, active humanitarian
and political groups started to record reports about police violence at
the borders and compiled the collected information in a project named
borderviolence.eu, in the attempt to show the systematic nature of these
events.

Among the most vulnerable and affected by these political developments
are those who do not possess enough capital to hire the services of
smugglers – potentially several times due to push-backs-, families and
minors. In November 2017, Madina, a six-year-old child from Afghanistan
was hit by a train and died as the Hussiny family was being illegally
sent back to Serbia on foot, in the dark, along the railroad tracks, by
overlooking Croatian authorities. Regardless of the child´s death, the
family was prevented from requesting asylum. The difficulty to reach the
E.U. forces many migrants to reside in Serbia for prolongued periods,
often in a limbo of rights and prospects.
The existence of so called “transit zones” on the Hungarian border,
which should supposedly create a safer and legal route for families and
children, only produced long waiting lists and lengthy processes and is
not a viable option for people traveling without a family. Furthermore
the waiting lists often created a corrupt business, which was connected
to deals with the commissariat or a lot of money for getting your name
on top of the list.

As everywhere else in Europe, actions of solidarity with people on the
move are met with a tough stance by Croatian authorities. On the morning
of the 21st of September 2016, G. and I. were driving in a car with the
family of 4 persons along a countryside road and ran into a border
police roadblock, about 50km from the Serbian border. As the family was
unable to provide identification, they were immediately brought to the
police station of Tovarnik, a small town near the Serbian border. There,
after hours of interrogation, G. and I. were finally detained as well
and awaited trial on the grounds of favouring illegal entry, movement
and stay in the country. The family´s right to request asylum was denied
– as it is standard practice – but they were nonetheless detained for
three days in order to testify as main witnesses against the two
activists, before being pushed back to Serbia.

The conditions in detention were particularly bad for the family. They
had to stay in the cell at the police station for three days. During
that period of time, only one of them was allowed to leave the cell for
one cigarette. The food which was given to them was little and they were
denied access to medical care for the sick father. Additionally it is
not sure, if they were being asked or interviewed by the police.
Probably one of them was forced to sign a paper which was not
translated. This would explain the false statement the police did about
the fantasy interview with the family (see below). G. and I., who were
unexpectedly kept in the same cell the whole time, had scarce access to
the lawyers and external information, so they were mostly waiting for
the first trial date.
After the first trial of the case, the family was pushed back to Serbia,
although they asked for asylum. But this was not taken serious by the
officials, as it is a standard procedure in Croatia. During their
push-back they were threatened by the police to be beaten up.

The criminal charges brought against G. and I. are grounded in a false
testimony collected from the familyaccording to which there would have been an economic exchange between the family and the activists. At the time, according to Croatian and
European law, human trafficking invariably involved a monetary exchange
or some degree of exploitation, a clause which is being ignored or at
times fabricated in order to criminalize acts of solidarity from civil
society. It is still unclear how the false statement was collected and
signed by the family, however during the trial there was a turn around
moment in which the one witness who was brought forth to testify against
G. and I. confirmed the version of events expressed by the activists,
denying the truthfulness of the previous statement. Nonetheless the two
activists were sentenced to one month of investigative prison, under the
baseless conviction that they could flee. After only 11 days, thanks to
an incredible show of international solidarity, 14.000 euros were raised
in order to bail them out.
After two years of wait, they are still awaiting to be notified of the
first official trial date. The only action taken by the police so far
was a phone search, in the attempt to find any reference to previous
knowledge of the family and a possible monetary exchange. Although a
plea deal was offered by the state, G. and I. have not accepted it in
their refusal to accept a wrongful conviction. In case of being declared
guilty, the plaintiff will propose a 8 months prison sentence on parole
and the payment of a fine, in addition to the lawyer fees that are
estimated to reach 10.000 euros all together.

Militarization and externalization of the European border regime are
first priority of the European Union. Whereas the E.U. is making Deals
with dictatorships and authoritarian regimes (i.e. EU-Turkey Deal), acts
of support and of solidarity are more and more criminalized. These
political tendencies are alerting! We will keep fighting and standing in
solidarity with people on the move and with people accused of crimes of
solidarity!

Against all borders and cages!

Abstract of the court session which took place on 24th and 25th of October 2018 to decide the case of the ones considered as participants in the riots erupted at the largest refugee camp for accommodating people in need of international protection on 24th of November 2018.

The legal proceeding against the accused migrants has finally started. 7 attended out of the 10 that were present at the sessions until recently. It has became clear that three of them have previously asked for reconsidering their detention measures as letting them to go back to Afghanistan. The Court has respected the request and the other three have given a claim of the same kind which has been approved during the session as well. This means that at the moment 4 out the initial 21 accused are continuing to stay in the closed facility of Luybimets. In all likelihood they will struggle to prove their innocence.

During the two days of the judicial proceeding, there were around 30 witnesses of the events from 24.11.2016 testifying the trial. Most of them were representatives of the riot police from Pleven, Plovdiv and Kazanlak. Although some employees of the State Agency for Refugees (SAR), in particular those from the Registration Reception Center (RRC) of Harmanli were also officially summoned, there were no migrants speaking up. The accused themselves were yet not given a voice to share their perspective on the open resistance back in November. Among the police witnesses neither seniors, nor commanders of the police actions during the riots were present. However, according to their statements their commanders were negotiating with some of the protesting migrants but no one could not have said what the gist of the negotiations was. Moreover, none of the police officers was able to clearly state that the accused present in the court hall were direct participants in the riots. Yet, most of the officers have experienced minor injuries.

As already mentioned, the rest of the witnesses were representatives of SAR employed at RRC – Harmanli. In their hearing few things became clear – that the capacity of the camp was seriously exceeded during the days prior to the riots; and that there was an ongoing fuzzy procedure regarding the quarantine due to quite a high degree of delusions coming from the local nationalist political parties. Moving on, and grounded on their words, (pre-)conditions to determine whether or not the camp residents should have been kept in isolation did not exist. Despite, all of them were prohibited to leave the camp premises. Interestingly, the access to the working places of the SAR employees at the RRC was not denied (although the camp was supposedly in quarantine). Thus, they have became unwillingly eyewitnesses to the incident. The SAR representatives could also not claim if some of the present accused migrants was part of the group, 40 – 50 member sized (out of 2 000 – 3 000 migrants accommodated at the reception center, but closed back then; most of them were protesting against the inhumane situation they were put under unlawfully), considered as the main actors who ended in clashes with the police. Lastly, according to the SAR statements, almost all of the camp residents gathered at the ex-parade ground to express discontent in the time of the riots.

Amongst the officially summoned riot’s observers, only one policeman and one employee of SAR (who could be easily mistaken with an employee of another agency called National security), pointed on three of the accused as indirect participants in the riots. According to them, they should be suspected of instigating the others, however, no solid evidence was presented.

After all, the caused damage to the reception center lowers to one common lounge room (where the food was previously given). Some of the policemen have told before the court audience that a damage was also made over the water cannon, most probably caused by makeshift slings. The on-field-officers were pelted with stones and other objects as this was accompanied with obscene gestures and insults such as “Fuck the Police!” and “Open the gates, open the borders!”.

It is important to drawn attention on the fact that by now, in all of the judicial proceedings, the police violence was out of question. It is this physical force that erupted after the end of the riot, and performed in the migrant’s rooms. Some of the official defenders were asked for this, and their response was that the accused did not say anything on the topic. It is more than obvious those appointed defenders do not have any intentions neither to voice the issue, nor to signal the prosecutor.

None of the attendants pleaded guilty to the charge of the accusations. The very few and not persuasive testimonies are partially based on a video recording that we never saw. However, according to the appointed lawyers the recording is of a bad quality, and identification would not really be possible. 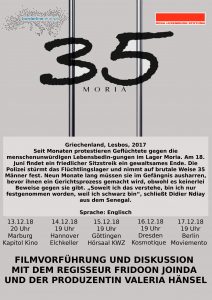