Ahmed H’s case will be retried, but he remains in prison. Ahmed is one of the Röszke 11 and is in prison for 2 years now. 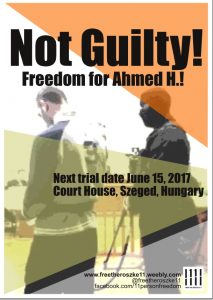 Yesterday afternoon, the appeal court of Ahmad H. was held in Szeged (Hungary) .

The prosecutor started the session by refusing even the necessity of having an appeal court, since in his opinion the right to a fair trial was respected in the first instance court. He added that there is no need of hearing new evidence or witnesses and asked to exclude some of the police reports to be considered. He wanted to classify Ahmed not as a person holding a permit to free movement, but as a third country national. He finally concluded that the second instance court should uphold the decision of the first instance court.

The prosecutor’s argument against Ahmed is mainly that he should have known that the border was closed and that Hungary was only accessible through the transit zone. Ahmed later responded to this charge that he and his family did not know anything about the border being closed. At one point, Ahmed interrupted by asking to loosen the chains on his legs, because they were too tight. The judge used the situation to have a break.

After the break, the hearing of Ahmed continued, with a twist however, as the prosecutor repeated the first instance prosecution and demanded an even higher punishment – to increase his prison sentence from 10 to 17 and a half years.

Ahmed’s lawyer Bárándy criticized the treatment of the evidence in the first court and the first verdict as contradictory and insufficient. No evidence had proved that Ahmed was leading the crowd and some crucial exonerating materials were ignored in the first trial (e.g. one of the police’s recorded audio material was misused by the first court since the content of the transcript did not match the voice recordings).

Another point that was used against Ahmed was the fact that he was showing a V sign, which in the first court was misinterpreted. It was claimed that Ahmed was giving a two-hour ultimatum to policemen to open up the border. The defence mentioned this gross misinterpretation as a sign that the verdict of the first instance court should be rejected. He then continued by arguing that a verdict of such importance cannot include 205 technical words, since those words create a biased atmosphere. He finished his defence proclaiming Ahmed as NOT guilty for illegal entry since he was free to move within the EU and had the right to enter legally. He did not commit a crime but rather an administrative offence by entering Hungary.

The court finally concluded that although the first instance court had the right to refuse available evidence, it did not analyse it enough and did not sufficiently explain why such evidence was refused. Relevant facts were established, evidence was presented, but the decision lacked proper reasoning and deliberation. Thus, the verdict was not consistent and objective. Moreover, the first instance court should have analysed whether throwing stones was indeed an attempt to force a state organ, or just an act of losing self control – the latter would have meant that the terrorism charge was not valid. Additionally, there seemed to be confusion in the police report on how much time was given as an “ultimatum” and who gave it in the first place.

Since the first instance court based its decision on these confused and inconsistent testimonies and interpretations of facts, the second instance court was unable to make an informed decision. The court thus concluded that the case must be retried to examine the evidence properly and that this needs to be done by a new council. Until then Ahmed has to remain in pretrial detention.

Migszol Csoport strongly disagrees with the attempt to portrait Ahmed as a terrorist and denounces the instrumentalisation of his case by government affiliated media to trump up hate. The gross misuse of anti-terrorism legislation for thinly documented, minor offences makes the years-long imprisonment of Ahmed a scandal and a form of cruelty that caricatures any notion of the rule of law.