What is Autonomous Factory Rog 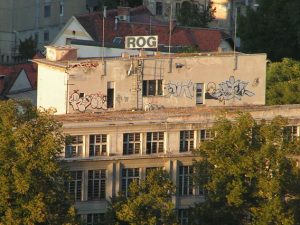 og factory is an industrial complex on the east edge of Ljubljana centre, which produced the famous Rog bicycles and was shut down in 1991. Since then it has laid abandoned, empty, and in deterioration for 15 years. In 2006 the area was occupied by engaged students, artists and activists as a critical response to the post-socialist transition process (privatisation and de-industrialisation), and erosion of public and social spaces (individualisation and atomisation of society). The occupation pulled legitimacy from the need for places for non-formal artistic, cultural and political activity (autonomy, alternative culture, horizontal political organising).

Users secured and cleaned the spaces and established ateliers, workshops, galleries, a skate-park, concert hall, recreational facilities and social centres among others. Despite the municipal efforts to block or disable the grassroots activities (refusal to sign the legal contract for at least temporary use, and not allowing the community to tap into public electricity network), the users used their self-initiative, collaboration and resourcefulness and in 11 years created one of the main junctions of urban culture, critical thought and political activism on the level of the city, the state and beyond.

Where are we today?

Today, there are around 15 organized collectives and around 200 individuals active in the factory in 30 spaces that are relatively self-sufficient and autonomous. The community is bound together through assembly which is the main political body following the principle of direct democratic decision making and consulting.

Social center Rog– primarily meant for socialising and political organising of socially disempowered and marginalised social groups and individuals whose workers, civic and/or human rights are violated, working on problematics of social inequality and exclusion, economic exploitation, racial discrimination and other forms of discrimination tied to sexual orientation, personal circumstances, cultural specifics, with a more queer-anarchist turn in the recent years. It has been a breeding ground for most of radical left organizing in the last 13 years.

Ambasada Rog is a community center run by refugees and activists, squatters, artists, students and workers from all over the world, united in fighting beaurocratic barbed wire fences and helping each other to survive in an increasingly unfriendly Europe. It is the only space in Ljubljana, that offers community lunch every day.

Current state of affairs and threats of eviction

In the summer of 2016 the municipality tried to evict the factory with the use of security guards. In preparation for such an event and in reaction to it, a mass of people gathered and threw out the security guards from the premises of the factory. The whole event and its aftermath was covered by extensive national media coverage, especially the two month barricade ridden occupation of the factory as well as cultural and political festivities.

After the attempted eviction on the 6th of June 2016, eight individuals from the community of Autonomous Factory Rog (as the Assembly of Rog users couldn’t be recognized as a subject of law) filed a lawsuit against the municipality of Ljubljana for its’ violation of the propriety rights. The lawsuit argued that these individuals have the right of possession of the property on the basis of their 10 years and ongoing period of presence and activities in in contrast with the municipalities ownership of the property.

The court of first instance issued a temporary court order, granting Autonomous Factory Rog users temporary possession of their property and premises until the whole matter would finally be settled out in court. One of the reasons for the successful issuing of the temporary court order being was also excessive physical violence used by municipality’s private security forces during attempted eviction in June 2016.

Enormous lawsuit trying to push us out! Municipality subsequently answered with indemnity civil lawsuit against those eight individuals who filed a temporary court order (and propriety violation lawsuit) by suing every one of them individually with lawsuit’s estimated value of 200.000€ each, trying to force us out by enormous legal fees we are forced to pay to the municipality’s lawsuit, estimated at 4000€ – 5000€ each, totaling between 40.000€ to 50.000€ in the year to follow.

The factory continues to be a terrain of daily experimenting with alternative ways of organizing, it continues to provide space for those who are excluded from elsewhere and it continues to be a living organism of political organizing, exhibitions, movie screenings, community cooking, self-organized social work, sport practices, skate sessions, bike-repair workshops, non-commercial parties… Despite that, the future of Rog remains uncertain and depends on practices of solidarity! The decision about the future of Autonomous factory Rog has since June 2016 moved from the streets to courtrooms, where 8 individuals are being persecuted by the municipality with the aim to obtain legal grounds for the eviction of the community of Rog. The court procedures, a part from being unpleasant, represent a big financial burden for the individuals, the mounting legal expenses require constant organizing of community benefit events and a regular call for donations.

We cannot defend Rog as individuals, the defense requires a community response, because the story of Rog is also a case for a different, autonomous, non-gentrified city. Therefore we invite you to make a donation for Rog’s legal expenses to the following account:

All the donated money will be allocated to the covering of legal expenses of the persecuted individuals. However, we will soon meet again at the barricades, where we will be defending autonomy and community against repressive city authorities.

Spread the call around your networks, reach out, contribute!

Solidarity is a practice!