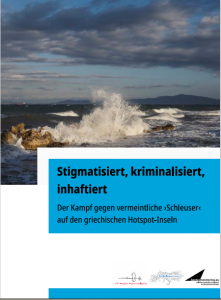 Sentenced to 50 years in prison – Freedom for Amir & Razuli

When Amir and Razuli tried to reach Greece on a rubber boat in March 2020, they were attacked by the Greek coast guard who tried to push them back to Turkey by force. The attack caused the boat to sink and the coast guard had to take them on board. Amir and Razuli were arbitrarily charged with “facilitating illegal entry” and “provoking a shipwreck”, in addition to their own entry. On the 8th of September 2020 they were sentenced to 50 years in prison.

Amir and Razuli, 25 and 23, fled from Afghanistan trying to reach Europe in search of a life in safety. With Europe’s ever-increasing closure of borders and the lack of safe and legal ways to enter Europe and claim asylum, they were forced to embark on the dangerous journey on a rubber boat across the Aegean Sea. Amongst the other people in the boat was also Amir’s young daughter and his heavily pregnant wife.*

They made their journey in March 2020, the month in which the Greek government announced the suspension of one of the most fundamental human rights – the right to apply for asylum -, and consequently charged people seeking protection with their own “illegal entry”, blatantly contradicting EU law and the Geneva Convention.

The Greek coast guard attacked the boat as soon as they had entered Greek waters and tried to push it back into Turkish waters using metal poles. In doing so, they punctured the boat, causing water to enter and putting the life of the people onboard at risk.

In the past months, numerous reports emerged bearing testimony to the Greek coast guard’s illegal and cruel practice of violent pushbacks, destroying the engine of refugee boats, disabling the boats, and then leaving the people to their fate in the middle of the sea. Read more about this in the New York Times, the Deutsche Welle and the Spiegel.

As the boat was about to sink, the coast guard eventually took them on board.

Following this deeply traumatizing experience, the coast guard proceeded with heavily beating up Amir and Razuli, arbitrarily accusing the two of being the smugglers. According to Amir’s wife who had to witness all of this together with her daughter, they only stopped when she held up their young child in front of her husband begging the men to stop.

As soon as they arrived at the Greek island of Lesbos, Amir and Razuli were separated from the rest of the group and brought to the police station. The coast guard accused them of their own entry, of facilitating the unauthorized entry of the other people on the boat and of having endangered the people’s lives.

They were since held in pre-trial detention and sentenced to 50 years in prison on 8th of September 2020. Although there is no evidence against them except for the statement of the coast guards, they were only acquitted of the accusation of “provoking a shipwreck”.

We are calling for the release of Amir and Razuli and all charges against them to be dropped!

Almost every day, people seeking protection are criminalized for their own flight and arbitrarily sentenced to lengthy prison terms and heavy fines (see e.g. the case of Hamza and Mohamed). Suspects, or what we would deem ‘victims’ of this unjust legislation, usually have limited access to legal assistance. Judgments are often pronounced despite lack of evidence and poor quality of translation. In Greece, the average trial lasts only around 30 minutes, leading to an average sentence of 44 years and fines over 370.000 Euro. According to official numbers by the Greek ministry of justice, almost 2.000 people are currently in Greek prisons for this reason. However, the fates of these people are seldom known. Arrested immediately upon arrival, most of them are locked away unnoticed, without their names known and no access to support from outside.

But we know the story of Amir and Razuli. We have organized legal defense for them, and we will fight for their acquittal in the appeal trial!

Help us to make their story known!

The European Union must stop the arbitrary incarceration of refugees and migrants!
——-
*Amir’s wife has meanwhile given birth to their second child. After the trial, Amir met his two-month-old baby for the first time and as he held his child for the first time in his arms, the police shouted at him to give the infant back to the mother, causing his family extreme distress.

SUPPORT US IN OUR FIGHT AGAINST CRIMINALISATION: https://www.betterplace.org/de/projects/79969-solidarisch-gegen-die-kriminalisierung-von-flucht-und-migration