On September 27, 2018,  took place the postponed on the 11th and 12th September consecutive session of the Regional Court in Harmanli against the accused in the destruction of public property and hooliganism of 10 out of 21 migrants from Afghanistan.

Once again the long-awaited hearing of the accused themselves has not happened. The reason is that witnesses are missing. The next court hearing is scheduled for October 24th and 25th at 9:30 am. 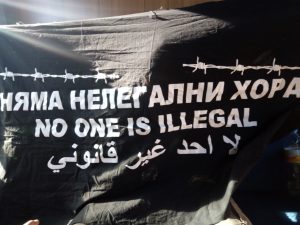 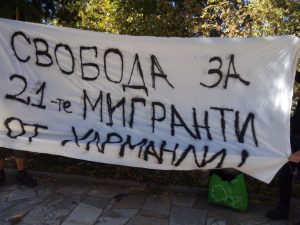 Shortly after the end of the session, two people waved banners with the slogans “Freedom for the 21 migrants from Harmanli” and “No one is illegal” and chanted “Freedom” and “Azadi” (“Freedom” in most languages of the Iranian group). Literally a minute after the start of the action, they were forced by the police to remove the banners, searched and checked their ID cards. The policemen said they had no right to protest infront of the court, saying: “Who told you that you can protest here?!”. One of the policemen said that as protecting them, they need to know what immense damage the migrants caused during the 2016 rebellion. One of the protesters said she had been an emigrant for most of her life and she knows very well what it is like to be in such a situation, to which the policeman replied (quote): “Yes, but there is a big difference between white and black migrants”… Asked for his name to be quoted for this frankly racist speech, he refused to give and legitimize. A little later, another police officer said that the name of the one with the racist speech is Lyuben Lyubenov, which is hardly true.

From all this, to us it follows that the attention of the authorities is already drawn and that it will be more and more difficult to protest without notice even outside the Harmanli court. We are also not surprised by the frankly racist attitude of a representative of the Bulgarian police towards people from the Middle East as a whole and Afghanistan in particular.