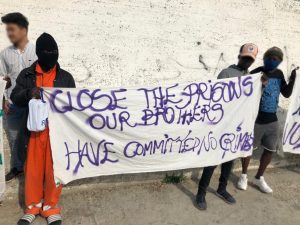 On 26 August 2020, about 60 mostly Arabic-speaking detainees in Moria pre-removal detention centre (PRO.KE.K.A) went on hunger strike. Since 5 March, Greece has been unable to carry out deportations to Turkey as a result of the Covid-19 pandemic. Detainees have been deprived of freedom for 174 days during which deportation – the only reason for their confinement – has been impossible. They are locked up without justification in conditions designed to drive them to despair.

From 5 to 8 April this year, detainees attempted to hunger strike. Their protest ended after a special police unit interrogated the strikers, beating a number of them. What happened during those days is still unclear; many could not speak openly of conditions during these days for fear that conditions would be made worse.

Many believe now that they have no chance of escape but that which they take for themselves. Suicide attempts are an almost weekly occurrence. On 6 January, a 31-year-old Iranian detainee took his own life after being held in isolation and denied access to psychosocial care. His death prompted a criminal investigation into staff and services at the facility.

Yet despite this, a structure and culture of impunity has allowed the cycle of violence to continue. Beatings – sometimes verging on torture – have become routine, and those who speak out are threatened with violent reprisal. The link between detainees and the outside world is tethered to services operating under a culture of camaraderie between prison officer and medic, lawyer, psychologist, creating a closed rank between detainees and the public prosecutor.

These abuses vanish under the code of silence that governs PRO.KE.K.A. The hunger strikers have chosen to break this silence.