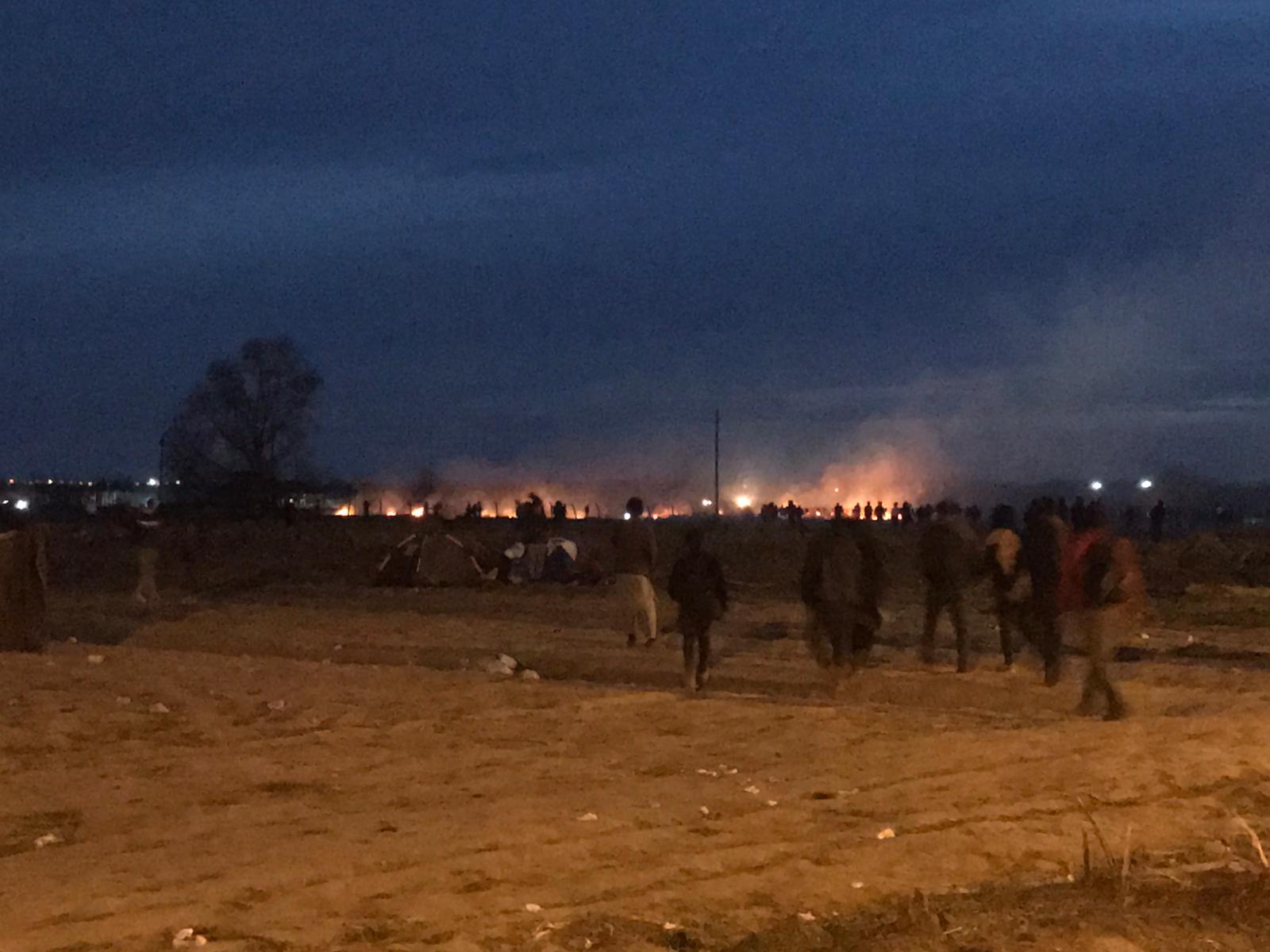 Shootings, Torture and Push-Backs at the Borders

News about people being shot by Greek border guards on the Greek-Turkish land border appear with increasing frequency. On social media information circulate about at least 8 people brought to hospital with gunshot wounds. Videos how that people have been killed, being stripped naked, beaten and tortured and pushed back from Greece to Turkey in mass expulsions. The murder of a young Syrian on Monday has already been analysed in detail by Forensic Architecture. In some areas around the Evros river people were blocked from two sides when special units of the Turkish police were mobilised to oppose the Greek pushbacks. Migrants report that they have been beaten also from the Turkish side and a video shows how families were transported to the border in busses and forced to get out.

The Greek government also announced a so-called “exercise with heavy weapons” carried out on the coast of Lesbos towards the sea in the direction of Turkey by the Greek government. Furthermore, a restricted navigation in the sea came into power, which bans any type of non-commercial or private activities in the waters around the northern Aegaen Islands. At the same time, there are more and more reports about refugees being brutally attacked by groups of masked people in cooperation with the Greek coast guard in the Aegean Sea. The engines of rubber dinghies were destroyed, boats pierced in the open sea or attempted to be capsized. Shots were fired at people in rubber dinghies. A child drowned. To an extent, the Turkish coast guard is still active in the sea, even carrying out pull-backs from Greek waters. Meanwhile, the Frontex units stationed in the Aegean were passively holding back.

Criminalization of Migrants and Suspension of Asylum Law

Adding to this, the Greek government announced that the right for asylum will be suspended for all new arrivals. Already about 500 people who arrived on Lesbos are currently held in the port of Mytilene and scheduled to be brought to a closed camp on the mainland on Saturday, 7th of March, presumably to be held in a military base in the town of Serres. From there, they will be deported without any asylum procedure.

Moreover, people seeking protection have also been criminalized and prosecuted. The number of cases is unclear but some newspapers reported about 17, others 45 and even about 183 people who crossed the border in Evros region and have been sentenced with charges of 3 to 4 years of prison with fines around 10,000 Euros. On Monday, seven men were sentenced to 3 years imprisonment on Lesvos for “illegal entry”, where three more trials are planned against unaccompanied minors in May. Many other trials are expected to follow.

Fascists Hunting Down People on Lesvos

Meanwhile, the hell of fascist violence has broken loose on Lesvos and Chios. Right-wing groups are hunting migrants and building blockades along the streets to check cars and their occupants. If they are not Greek or supposedly working for NGOs they are attacked and their vehicles have been smashed. The escalation of violence started after the Greek government announced the plan to construct new closed camps on the islands. Soon after the camp Stage 2 in the northern part of Lesvos was set on fire. Even the UNHCR was not spared from violence and several aid workers and volunteers were intimidated and decided to leave the islands. People were injured, their photos shared on Facebook among fascists groups and advertised for hunt. Shoreline response and sea monitoring teams who have been doing emergency response and monitoring for years were also attacked, while the police frequently disrupts their work. Simultaneously, right-wing groups prevented asylum seekers from landing and disembarking the boats.

Declaration of bankruptcy by the European Union

What is the EU’s stance on these developments? It should be self-evident that the brutal violence and the shooting of people in Europe would cause investigations for murder. It would be expectable that the suspension of the fundamental right for asylum, which directly violates the European Human Rights Charter and the Geneva Refugee Convention, should be seen as a scandal to be immediately sanctioned by the EU. At least that the EU should speak against the horrifying fascist violence unleashed against their own humanitarian organisations.

But none of that is happening. The president of the EU Commission, Ursula von der Leyen, does not seem to be particularly concerned about the brutalized violence within Europe. She praised Greece for being the “European shield” because “this border is not only a Greek border, it is also a European border” and promised Greece financial support of 700 million. Border reinforcement will be further strengthened through a RABIT operation by the European border and coast guard agency Frontex.

The eternal mantra that the events of 2015 must not repeat has become so deeply imprinted into the public’s mind that any violence seems to have become acceptable as long as refugees are prevented from entering Europe. This is visible not only through the absurd hysteria about refugees at the border, but also the almost fascinating irrationality. With its violent isolationist policy, the EU is not only exposing its much-vaunted fundamental human rights values to ridicule, but is also becomes the toy of the Erdogan government.

Accompanied by a chess-like played media coverage, refugees were released from deportation centres and collectively transported with buses to the Evros border and the Turkish coast while others joined on their own. The departing boats were filmed by state television companies and sent to the EU as a threat. It was a military counter-strike in the Syrian war. Refugees are being abused as a bargaining chip by the Turkish government to blackmail the EU and NATO to cooperate in the Syrian war.

The EU panics, although the EU-Turkey Deal is not even suspended. Deportations to Turkey continue and Turkish border guards are at least partially active. The estimated 130,000 people who would have crossed the border were never registered in the EU, and within three days only around one thousand refugees arrived to the islands. The absolute numbers of crossings in the Evros border remain low.

What’s much more frightening than Turkish power politics is the helplessness of the EU: Receiving the approximately 13,000 people from the border would be an easily achievable and legally required act for the EU with its almost 450 million inhabitants. But today, it apparently rather accepts those seeking protection to be shot than to break its dependency on Erdogan.

Sticking to the Birth Defect of European Migration Policy

While people are dying, beaten and instrumentalized in a dirty geopolitical game, the core failure is that the EU continues to firmly hold on to the EU-Turkey deal. Instead of learning from the fatal errors, the architect of the deal Gerald Knaus now speaks of an “Agreement 2.0 between the EU and Turkey”. Apparently, there can be no thinking out of the box, since the basic principles of the European border policy are based on blackmail and dependency on authoritarian regimes that do the dirty work for them. As soon as this relationship begins to falter, it becomes obvious that the policy is built on the basis of disenfranchisement. Shooting people at the border is only the logical consequence of a policy that systematically denies access to asylum.

In doing so, the EU fails to recognise the real dangers: Its policies lead not only to the death of refugees, but also to the fascistisation of Europe. A direct line can be drawn from the racist murders in Hanau to fascists hunting refugees and attacking support structures on Lesvos. It is therefore not surprising that right-wing networks in Germany are calling for people to go into battle at the EU’s external border and hunt people down. Luckily, they are received roughly by the local Antifa.