Another report from the trial on 28. October you will find here at FreeTheRoszke11.weebly.com. 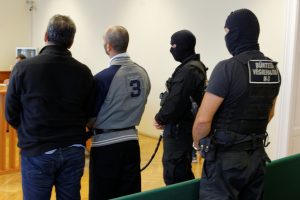 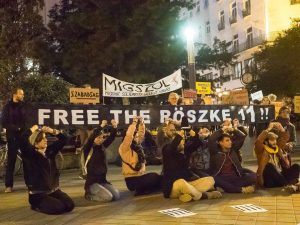 On 28.10.2016 at 9.00 am the court hearing of Ahmad started. The police refused lots of solidarish people that protested in front of the court building to enter. Representatives of Amnesty International were refused to enter as well first and only after long discussion they were allowed to visit the trial. There was massive police presence, and Ahmad was guarded by two masked soldiers.

9.00 am. The trial starts. The document presented by the court states that AhmadH was the leader of the protest. Among the proofs: migrants gave him pillows and food…The document has detailed description about what injuries the policemen had to suffer. Evidently they are the victims, not Ahmad or other refugees…

Then first time during the trial AhmadH stood up to oppose. He was accused to talk in the phone. He says he didn’t. Judge said just “okay, fine”…AhmedH claims phone recordings are fake, he did not instruct anyone how to cross the HUN border. The seized phones belong to his relatives.

AhmedH denies the accusations and saying he is a peaceful follower of Islam and he respects women. He says he went abroad to study Quran. He responds to alleged suspicious trips to Saudi & India. He went to former for hajj and latter to visit Muslim friends. Lawyer: “it’s fact that that every Muslims pilgrimage to Mecca. Catholics who go to Vatican are fanatics then?” Obviously the trial plays with the lack of knowledge about Islam.In the Hungarian judicial system Ahmad’s crime that he’s a Muslim.

So far the “evidences” are presented. His newly appointed defence lawyer pleads for an adjournment in order to contact international journos and volunteers and to visit his client in prison to take instructions. Prosecutor opposes the request. Judge rises to consider.

Defence asks the court to hear other 25 witnesses and have a meeting with AhmedH at prison.The lawyer asks to postpone the trial, that prosecutor attacks claiming that its just to win time. The decision will be made at 11 o`clock. Lawyer wants to attach @connellyandrew recording as evidence that he recorded with AhmedH during the incident. Prosecution not agrees because he claims the lawyer would have enough time to meet the defendant.

The claim to listen the new witnesses is refused, except for to listen witness György Rőczei, a policeman. Around 25 activists and journalists were among the witnesses, refused without any explanation..

The trial is postponed. The next trial will take place on th 30th of November at 9:00. A month to raise media attention and support for Ahmed H – The whole EU should take a look at this incredible racist showtrial in Hungary!

Live-Ticker from the court room and reports with more details you will find here: https://twitter.com/MigSzolCsop