Nach den Raeumungen dreier Refugee-Besetzungen in Thessaloniki im letzten Jahr und der zwei weiteren Haeuser in Athen vor drei Wochen, scheint der griechische Staat seine Ankündigung alle Besetzungen raeumen zu wollen wahrmachen zu wollen und eskaliert die Situation weiter.
Wir dokumentieren den Bericht eines Aktivisten:
Albatros squat was evicted yesterday. During the eviction, there were 13 arrests inside the house (activists from various countries and 5 migrants). 8 more activists gathered outside the building during the police raid and were brought by force to a police station but were released after 3 hours of checking their IDs. One of the arrested activists had to be carried to a hospital, because he was wounded during the eviction. All the arrested were freed earlier today, as the court could not provide translators. Their trial will take place on coming Tuesday,

Albatros was a privately owned house in the old town of Thessaloniki, that was squatted past autumn by internationals. 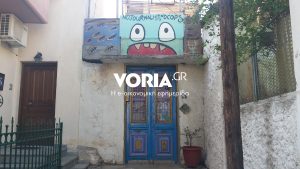 This is an image of Albatros squat, publishing in a local web site six days ago, in an article announcing coming evictions of squats.

Albatros was a rather small squat, mainly internationals were living there, but also a good number of migrants, especially the period after the eviction of Orfanotrofeio and the other squats in Thessaloniki, while the “refugee camps” around Thessaloniki were still full (during last July NoBorder Camp there were 27,000 migrants living in camps around Thessaloniki, now there are less than 3,000).

We call for your solidarity!