Update: Next Trial for Ahmed H. on 30th of October and 2nd of November 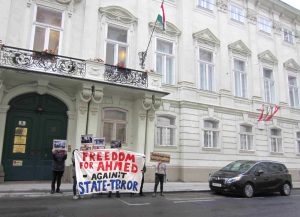 Ahmed H.’s case will be retried on the October 30th and November 2nd  in Szeged.
Join the decentral actions before the trial and spread the word!Ahmed H. is one of the many people who protested on the border of Hungary at the Röszke/Horgos crossing to open the borders again on 15th September 2015. A few hours before Hungary had closed them and had made any crossing a criminal offense.  Afterwards Ahmed H. was captured by Hungarian authorities and they claimed he was a terrorist leader of the protests. On the 30th of November 2016, after over one year of isolation in prison, he was sentenced to 10 years of imprisonment for committing an “act of terrorism” and is since then in high security prison in Budapest. All requests for visit were rejected or simply ignored by the authorities. He is being isolated additionally since he cannot receive letters, except from his wife.On the 15th of June 2017 in Szeged, Hungary, Ahmed H. had his second instance trial which referred the case back to the first instance court to reconsider the terrorism charges due to “lack of reasoning and interpretation”. This reconsideration will take place on the 30th of October and continue on the 2nd of November. The trial against Ahmed H. is a racist showcase that tries to strengthen the idea that all migrants are terrorists and to criminalize another protest against the EUropean border regime (read more about the previous trials on our blog: http://freetheroszke11.weebly.com/).How can you support?
1) Join the protests
Join our decentral actions all over Europe to put pressure on the Hungarian government and court system and show Ahmed that he is not alone!  During the days around the trial dates on the 30th of October and 2nd of November protests at embassies and consulates in different cities will take place: Budapest, Vienna, Marseille, … If you want to organize a protest at your local embassy/consulate or other solidarity actions contact us and we will link it on our website. Also more creative and subversive forms of protest are welcome!

3) Spread the word
Spread this update, the information about the trials, our website and the crowdfunding over your networks! Solidarity is our weapon !

We continue to struggle for the freedom of Ahmed and against the repression of state institutions!
Migration is not a crime as fighting for freedom is not terrorism!
Freedom for Ahmed H., freedom for the Röszke 11, freedom for all imprisoned migrants, freedom for all political prisoners!